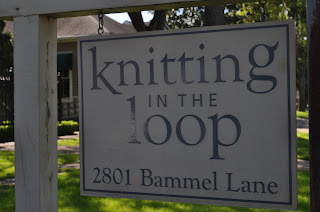 I broke a circular needle. I broke it while working on the baby blanket in the car on the way to visit my Grandmother in Houston. I was upset, not surprised; it’s the third (THIRD!) needle to break while working on this blanket. All of them were Addi turbos, and all of them were bought at the same store*. I think there was a bad batch. All the other Addis I’ve owned have stood up to the intense strain I put on needles. (Although, I must confess I knit so tightly I’ve been known to break yarn, so breaking needles is not impossible in my world.) Fortunately, this needle broke just a few miles away from my Grandmother’s house. I’d have been livid if I still had most of the four hour trip ahead of me.

I am under a self imposed deadline to get the blanket done by April 7th, and I was just starting the edging. I needed a needle the very next day if I was going to get enough knitting done that weekend. So, I looked up the nearest yarn store and decided I’d drag DH and Grandmother there with me the next day. The nearest I found (which wasn’t actually close to my Grandmother’s, but there don’t seem to be any yarn stores on her side of Houston) was Knitting in the Loop. And, although I didn’t know it, I was in for a treat.
When you enter the shop, on your left is a spot to sit and knit.
I saw from their website they hold some exciting classes. There was a tatting class being held when we got there. I wish I'd had the chance to take it. I also saw that they were going to have a dye workshop later in the month.

The wall of needles was extensive and wrapped around into another room. 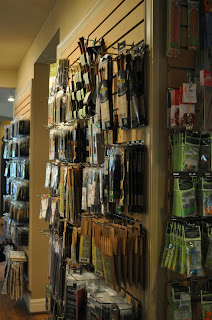 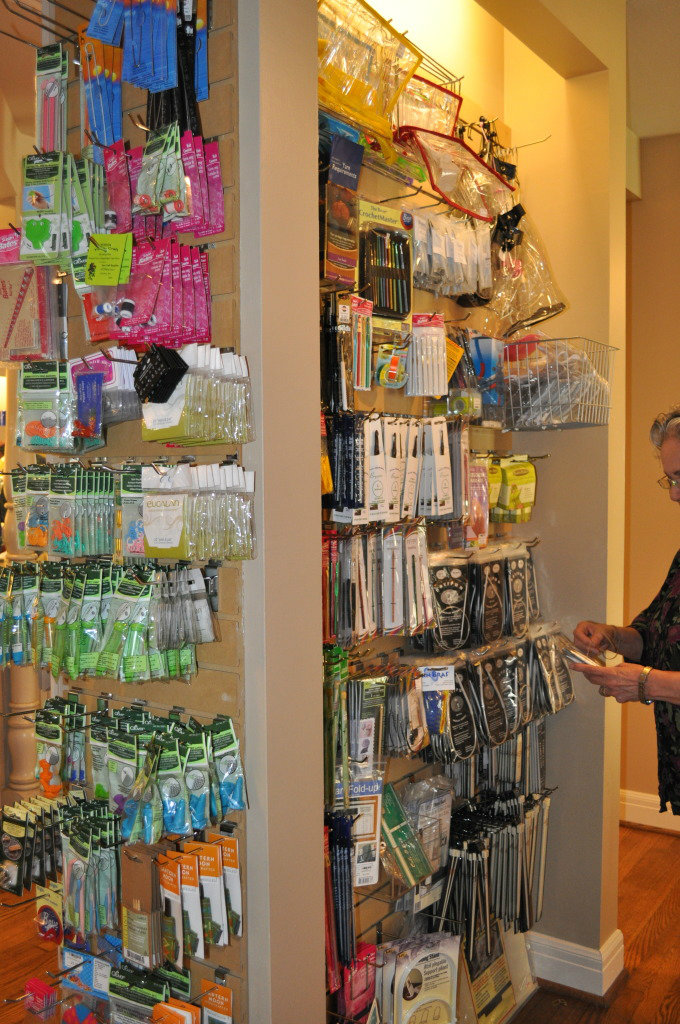 The knitting books took up a rather long hallway.
I loved the use of furniture to hold and display yarn.
And the funky metal sculptures elevate the yarn on display from decoration to art. 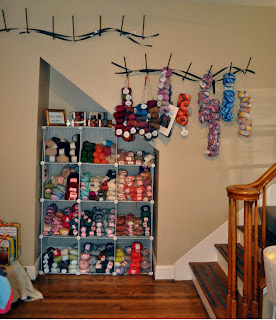 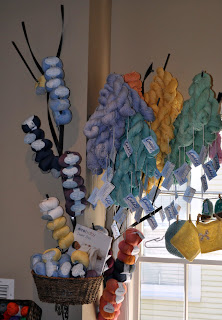 While the amount of yarn, books, and design that went into this store was stunning, even more impressive was the knowledge of the ladies who worked there. They were all amazingly friendly, and the time that they were willing to spend talking through your issues was phenomenal. Sandy spent at least half an hour with me talking over the merits of different corners. And then when I presented my needle killing blanket, she asked, “Honey, why are you so stressed?!”

She was fun, witty, and genuinely interested in getting to the cause of my tight knitting. She diagnosed me as an overachiever and said, “After this blanket, you’ve got to loosen up. Pull on each stitch to give it some room, and then they will slide better. It might make you slower, but the knitting will slide easier, and you won’t end up breaking needles.”

I don’t know if I’m going to be able to relax the death grip in which I hold my needles, but I'm still thinking about Sandy’s advice. Once done with the blanket, I’ll try to loosen up. I’m contemplating knitting a hat in continental.

Next time: Another yarn store, this time in Nevada!

*My LYS let me exchange the broken ones for new ones, but I was halfway across Houston with half a circular needle.
Posted by seeherknit at 8:02 PM

That store looks so charming! I want to explore my local yarn stores, but need to do it without the littles...