Oxford - the name comes from the place on the river where the oxen could cross (ford). The river is the Isis, well that's what it's called for the ten miles that it runs through the town, but it's actually the Thames. We went on a tour of the town and the colleges and I picked up all sorts of useless trivia. It was great fun. It also helped me appreciate all the silliness that goes on in the Unseen University in the Terry Pratchett books. They call Cambridge “that other place,” only you have to make sure to say it with disdain. There’s a college at Oxford University that doesn’t have any students. And every hundred years they add another verse to an ode to a duck. No, really, I swear!

I loved Oxford. It is old and steeped in tradition, but not above making fun of itself. I dream about having gone to school there. The system is very interesting, there are over thirty different colleges (I think it was thirty-eight or nine) that make up Oxford University.  You study almost everything in your own collage. And then you have a tutor who accepts you as a student. It’s a very old-fashioned kind of mentoring system, but it sounded marvelous once you made it through all of the hoops (and some of them are on fire) to get in.

I searched out yarn shops that were open the day that I was there and there was only one. It was called Brambles. It was another "put off to the last minute yarn shopping" adventure; we got to the store about ten minutes before it closed. 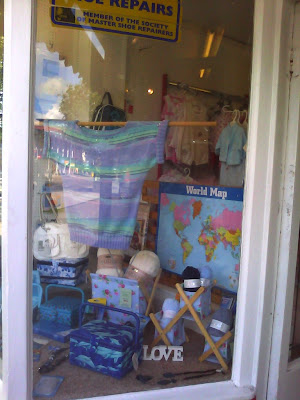 The sign at the top of the window says “Shoe Repairs, Member of the Society of Master Shoe Repairers.” This should have tipped me off.

Walking into this store was an experience. I’m having a hard time describing it, so I’ll let the (rather blurry, sorry) pictures explain. I think I’ve put them in the order you see things from entering the store to the back.

The above are all pictures of the same store.
This store is not near the center of town. We had to take a cab to get there and I’d thought we would have to take a cab to get back. That’s why, when my credit card was rejected because it didn’t have a chip and we really only had enough cash on us to get back to the center of town, I decided that I didn’t need the yarn I’d picked out.

I’d really only picked it out because I wanted to be nice. The selection there was fine, as long as you are only interested in making washable baby stuff. Fine enough, but not why I started knitting. If you were looking for anything out of the ordinary or luxurious, you were in the wrong store. Although, DH pointed out that the selection of shoe polish was impressive, there was even pink polish. I’m given to understand that this is very rare.

We did not in fact find a taxi or a place to catch a taxi anywhere near the store. So we walked the two and half miles back to the center of town, not a hard walk but we did miss tea. As I’d been looking forward to having more scones, I was a bit put out by how far away it was. All in all I would not have gone for the yarn, but looking back the place was so odd I'm kind of glad we went.

We did find the time to watch the last movie in the Harry Potter series. Part of it was filmed here, do you recognize this stairway?
Yeah, I was at Hogwarts (also known as Christ Church College).

This is what it looked like from outside:
Isn't it gorgeous? Doesn't DH take great pictures?
Posted by seeherknit at 10:00 PM

YOU WENT TO HOGWARTS?!! That's awesome!!