You may have been wondering why I fell of the face of the internet. DH and I went on a two and a half week vacation. We met up with my parents (who had started their vacation a week earlier) and bopped around Paris, Brittany, Oxford and London.

I had two posts mostly written before I went on vacation and I’ve got a whole bunch of pictures from vacation that need to be attached to posts I haven't written yet. I've cheated and back dated the old posts. I could have posted them while we were on vacation but I ended up taking a vacation from the internet the entire time. No facebook, no email, no computer except DH's iPad and that was mostly because I was reading a book on it. I'd borrowed a book from the people we stayed with in Paris and was halfway through when it was time to leave. I didn't want to take the book so DH bought it for me on his iPad.

I couldn’t bring the spinning wheel with me, so I didn’t spin. I brought the shawl, but it is lace, and since I didn’t want to ignore the sights, I worked about 3 rows in 3 weeks. So these "what I did on my summer vacation" posts will mostly be about the yarn stores I visited, and the yarn I bought there. I tried to visit one in every place we went, but the thought only struck me halfway through the trip so I'd missed out on going to one in Brittany. I hit up two in Paris, went to one in Bourton-On-The-Water, one in Oxford, and tried to go to one in London, but we ran out of time.

The first was Le Bon Marché in Paris. The yarn is on the third floor, take the escalator up and turn left and go down the hall for a while. Do not be discouraged, the yarn is there, it’s just hiding. They did not allow pictures to be taken so I’m not posting any. I didn't have my phone with me or I might have taken one or two without asking. As it was DH had his giant camera and I think it scared the shop people.

Le Bon Marché is a giant department store and the set up was very well organized, but a little sterile for my taste. Still the selection was impressive, expensive but nice stuff. I ended up getting yarn made out of sugar. You read that right. Here’s what it looks like: 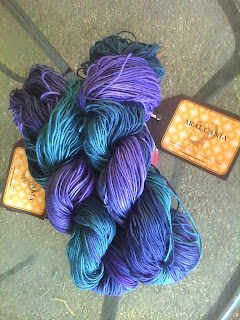 Next time a trip to Elle Tricote (She Knits). The link is to the Google translated version of their website.
Posted by seeherknit at 6:50 PM

I'm pretty sure the card just said sugar, I'll have to check. Still I'm sure it's made out of the plant, like they make bamboo yarn. It would be fun to mix milk fiber with sugar fiber, spin it up and then somehow dye it with tea leaves. But that might be a bit silly.

I was wrong, it says sugar cane. Still, I'd no idea that sugar cane was being made into yarn. It kind of blew my mind when I saw it.