This past weekend was a mix of parties and down time. I’m still not allowed to spin or knit in any significant way, but there was enough going on this weekend that I didn’t miss it too much.

Friday we hung out at P&S’s. We brought the puppy with us, and the three dogs got along very well. S was already there and S&K showed up soon after we got there. Popeye’s chicken and mint chocolate chip ice cream started the weekend of food off right.

Saturday was A’s Alice in Wonderland Birthday brunch that E hosted. She had been prepping for it for quite a while. It was beautiful. I got one quick shot of some of some of the set up, but it doesn’t begin to show the extent of the decorations or food, or little details that just made this party. 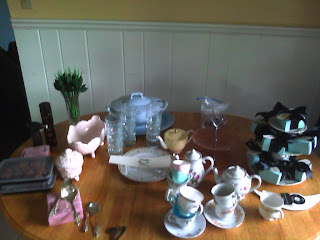 And here’s a picture of the bacon roses I made. 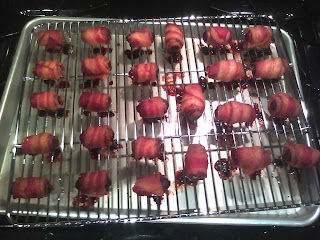 They aren’t very pretty (they looked better once they were on their stems), but they did taste good. Should I make them again, I’d go with the shorter center cut bacon rather than the longer strips. They looked and tasted better. The rest of the food was mostly catered from Kerbey Lane. Except the blueberry scones were from Thistle Café. I love their scones; they are somewhere between cake and a biscuit.

Saturday afternoon DH and I did laundry; yes it was thrilling. Then we, along with my sister and her friend C, went to A’s evening party, as the brunch was just for a few close girl friends. I’d expected a chill house party, but A&S went all out with food and flowers. And E’s decorations were fun and festive. My sister and C went as Tweedledee and Tweedledum, and their costumes were a hit. My Mad Hatter in a tutu was well accepted also.

Sunday we got up and went out to pick some figs from our fig tree. I ate a fig off the tree for the first time this past Wednesday. I love figs, who knew? Our tree is producing for the first time in any real quantities. Last year the birds ate the few that it had. I wish I knew what we did differently this year. 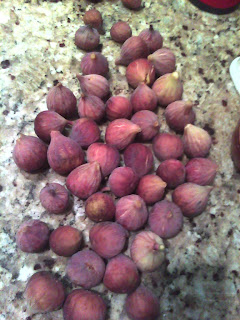 These are the figs I pulled off in just one harvest. We’ve harvested the tree at least five times. There are still lots of little green ones, and half ripe ones.

We brought about two or three pounds of figs with us and headed down to San Antonio to spend the afternoon with DH’s parents. We spent the time eating a wonderful dinner, making (or in my case attempting to make) origami butterflies, and hanging out and talking. MIL is planning on making a fig cake of some sort so I’m glad the figs will get eaten.

We came back a little late and picked some more figs before a little more laundry and then crashing out. DH and I are going to be going on a trip to Paris and Oxford soon so we are trying to get ready. This is the driving force behind the clean clothes.
Posted by seeherknit at 6:20 PM