Thursday DH took the day off so he could get to K&S’s rehearsal on time. He decided that since he had the day off, he might as well get that new car that he’s been talking about for over a year. He was late to the rehearsal, but he did have a shiny new car. I was a little cold towards the car at first, but I got over the fact that it was not the FIAT 500 by the end of the evening. We went to the BBQ rehearsal dinner at K’s family’s place and it was a laid back affair. K’s family is from New York, and the Texas drawl mixed with the Long Island accent was an uncommon blend. It worked though.

Just before we went home, I had a flash back to college. We were hanging out in the evening, trying to leave, but having too much fun. It was chilly, but not cold enough to make us go inside. The place was different, but the people, the mood, and the chill in the air were the same. And I wished that B and K&V lived in town. Hanging out with old friends and wishing they lived in town was kind of the theme of the weekend.

Friday I got off work early and hung out at S&P's with R&K and B. That night was the batchelorette party. We went out to dinner. Turns out drinks taste better out of anatomically inspired straws. Then we went to Main Event. I was reminded how much I love DDR and found out that the 3D movies, where your chair shakes when you run into something, are a lot of fun. And for a bachelorette party, what could be a better name for a mini-golf course than this:
We met up with the bachelor party and hung out till the wee hours. There may have been some celebratory drinking.

Saturday was spent recovering from the night before. We watched Scott Pilgrim vs. The World. I was rather insistent. The group that was hanging out is no stranger to video games, so I felt they needed to see the video game, music video, romance movie. I think they dug it.

Sunday I got up wicked early to be down in Kyle by 8am to help set up for the wedding. If you want to get to know people there is nothing like preparing for a wedding. I got to know both the bride and groom's family quite a bit better than I had previously. K's family is a hoot, and S's mom is a whirling dervish of artistic energy. I loved them all. I also learned wrapping chairs with fabric is back breaking work. We were mostly done by noon, so I headed home to shower and change.

On the way back to the wedding site, DH called to say that everyone was okay, but the brand new car had been in an accident. It was t-minus an hour to the wedding and S, the groom, was stuck on the side of the road talking to a cop along with the three groomsmen and an usher. We got it sorted (car was towed to somewhere in Buda to be dealt with later, we have insurance it will be fine), and we got everyone to the wedding in time to finish the last touches.

It was an outside wedding, and the weather cooperated.
The decorating inside the hall was excellent. 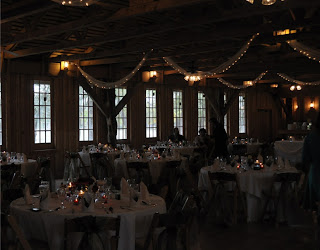 And they carried the peacock theme inside too. 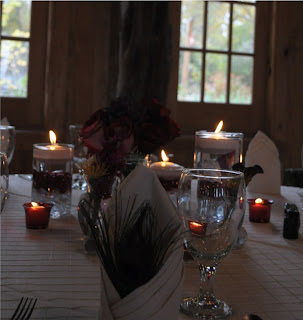 The flowers were amazing.
And the cake was both modern and sweet.
But my favorite picture is one DH took.
It was a beautiful wedding. And, despite the disappearing car, a fabulous weekend full of new friends and old. I wish they all lived in Austin.
Posted by seeherknit at 8:00 PM

The wedding looked beautiful! Congrats to S&K! (I hope I got the initials right! There were so many!!)

The wedding looks gorgeous! Love the red hearts on the cake. Congrats to K&S!