I was feeling better yesterday afternoon, and then I tried to talk to someone for longer than five minutes. So I'm home again today. I've learned a few things from these two days off. The first is that I will sleep in way longer than I intend if I have not set an alarm.

The second is that once you have a blog, you will read the blogs of other people much more closely than you would otherwise. That might just be me. I know Emily in real life, but I'd never read her blog before. It is really well written with pictures that blow mine out of the water. I might eventually have to start using something more than my cell phone camera. Also, I've been reading my cousin's blog. She has archives that go to 2005; I feel like I'm so late to the game.

Thirdly, while I've been known to lay on the sofa like a bump on a log, if I don't turn on the TV, I eventually have to get up and do something. I've finally noticed that TV, while very entertaining, does eat my life. I feel better about watching it if I'm knitting, and at the end of a hard day at work it is great to unwind to. But I've not been at work, so don't need to unwind. So things I've been doing while not watching TV:

Yesterday, I attempted to clean and organize my craft room. Like a 10 year old cleaning his bedroom, it is now more of a mess than when I started. But there is method in the madness. I swear! It is difficult to put things away when you haven't decided where their home is yet. So on the floor until that home is decided upon.

One of the things that needs to find a home is a beautiful handmade tablecloth. I think it is at least 60 if not 80 years old. It stinks of mothballs and age. It is yellow and has stains. I love it. I can't actually be in the same room with it.

I had thought leaving it out to air would help get rid of the smell. That's why it's been laying out on the craft room floor. But it's been weeks and the thing still smells, not as powerfully awful as when it was first given to me, but enough that I don't want to touch it. And although I was scared I'd ruin it, I decided today it was finally time to clean the darn thing.

I am not a professional restorer. I had no idea how wash this without hurting it, so to the interwebs! After reading many confusing and contradictory articles, I decided to treat it like I would wool, or lace, and hope for the best.

First I rinsed it out in the sink, twice. The water was yellow and smelly after the first time.
Then I moved it to the bathtub and filled the tub with cold water and Woolite. 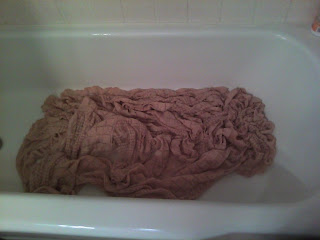 I let it soak for an hour or so, and then rinsed it out a few times before I laid it out on the grass.  Supposedly the mix of the chlorophyll and the direct sunlight has a bleaching effect. I think it's just the direct sunlight, but as I haven't done any serious research into the matter, on the grass it goes. 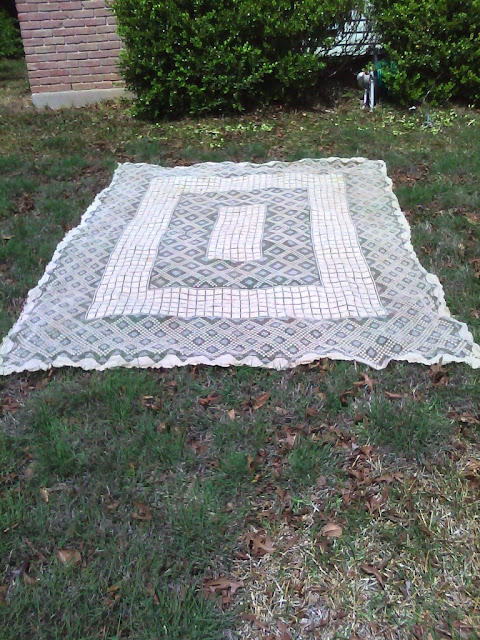 Here are close ups of the rusty looking spots. 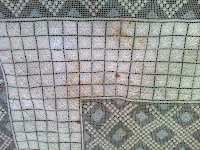 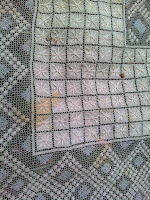 I have read that a mix of lemon juice and salt should help take them out, but I am going to let the sun do it's work before I attempted it.
So I've set the timer for two hours to remind me to check on it. I might watch an episode of Downton Abby to pass the time.
Posted by seeherknit at 2:46 PM

What the hell is Downtown Abbey?

Erin - it's a BBC/Masterpiece TV period drama. I love it. B thinks it's a well acted, well written soap opera. He is right. The difference is I care what happens to the characters, and he doesn't.