So many dishcloths... ahhhhhhh!

Way back in early September I mentioned I had a few projects to finish before I started Christmas knitting. This one turned into a Christmas gift because it took me so long. 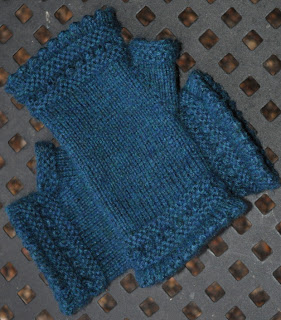 They are Susi's Reading Mitts. I've made them before, but since then they've taken the pattern down, so I did some of it by memory and some of it by guessing. I didn't use the right yarn, and though I thought I'd gotten gauge, I hadn't. For these many reasons I got this far before I realized that they were too small.
I ripped them out, had a mourning period of about a month, and then started over. I'm going to claim having to start over as the reason why I didn't start on Christmas knitting early enough. That's my story and I'm sticking to it.

So my Christmas knitting became Christmas crochet. And since I'd learned to make soap the easy way, I thought I'd make dishcloths to go with a bar or two of soap.  Fabulous gift idea, I know.

After being thoroughly sick of making dishcloths I decided to make a hotpad for my MIL.

But the cool stuff happened when I threw out the patterns.

Next time: The necklace pattern I promised you a while ago, and pictures.
Posted by seeherknit at 8:00 PM

Are those my gloves??

Yes, those are your gloves.

GO Erica! so impressive that you got things DONE by Christmas, and they look good! Suzanne