As we were going to the Friday gathering after a friend’s birthday, I stopped by Central Market on the way home to pick up some flowers for her. Of the non-florist shops in Austin, CM has the best flowers. Out front they had some blackberry vines in flower so I grabbed them and then, since I was shopping hungry, I also ended up with some pate, double cream Brie, little toasts, and roasted garlic and cheese bread.

We brought the bread with us and contributed to the feast that evening. We ate, drank and were merry, and a great night was had by all. Two new, deadly discoveries: blackberry wine from Gruene, and Snicker’s cake. Mmmmmm…

Saturday DH had to work so I got up and made him tea then promptly went back to sleep. When I got up later, I hit the ground running. Met up with some girlfriends and we hit up the Renegade Craft fair quickly, before heading to yoga. Yoga was energizing instead of restorative and we stopped by the craft fair again. My brain is abuzz with creative possibilities. I still need to get my mind around the fair; I’ll post more about it later. DH came home from work and requested dinner rather than a show, so we went to Trudy’s with friends, and friends of friends from out of town.

Sunday DH and I camped out on the sofa. I finished spinning my green fluff into green singles, and it was only when I started to ply that I realized that I might have an issue. I had filled two bobbins completely. I had one bobbin to ply onto. I think you can see where I’m going with this. I think I’m going to end up with at least three skeins of green yarn. 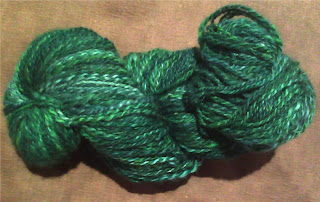 I finished the first one and then it was time to head to Shakespeare in the park.
I was not excited about going to see Love’s Labour’s Lost. I’ve never read the play, and had no attachment to it. I thought the setting (early 60’s beach party) was going to be silly, but most of all I don’t like being outside in the summertime if I don’t have to. I don’t do well in the heat (by which I mean if it’s over 85 I sweat profusely and I’m pretty much miserable), I tend to get eaten by bugs, and did I mention I don’t do well in the heat? I much prefer to look at nature from the regulated comfort of the indoors.

I’m really glad we went. A friend brought peppermint and lavender oils which kept the bugs away. It had cooled off enough that, in my super spiffy REI clothes, I was comfortable. And the, what I thought was going to be overdone, setting made perfect sense. It helped remind me that even Shakespeare’s “lesser plays” are fun and, you know, written by Shakespeare.
Posted by seeherknit at 10:00 PM