I’ve been trying to figure out what it was about the craft fair that caused me to have such a hard time getting my thoughts together.  First, I hadn’t planned on going until the very last minute, so I had no plan of attack.  I wandered around stunned, trying to take it all in. But the magnitude of it and the sieve-like nature of my brain have combined to make the details go fuzzy. And that's a shame because the details were so cool.

This was up at a booth of funky accessories. I loved the sentiment.
Secondly, the creativity and inspiration I found there was incredible and overwhelming; I haven't fully digested it. In order to keep track I grabbed a card from every stall that had something I liked: 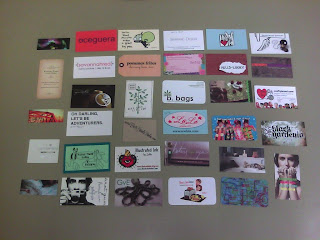 I did end up buying a few things. 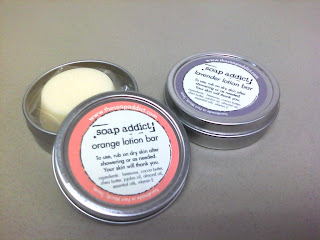 Lotion bars use the heat of your body to become soft, so you don’t get a whole bunch of goop on you. Brilliant!

A book at one of the few booths that had yarn-like things: 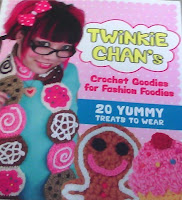 The only yarn craft represented at the fair was crochet. Which kind of fits my theory: It takes so long to knit something that - unless you are making very small items, with very cheep yarn and/or are going to charge an incredible amount of money - it is not actually worth trying to sell your knitting.* At the craft fair, where most objects were going for the $3-$60 dollar amount, it seemed like it’s not worth trying to sell knitting.

Recently, I’ve had more than one friend interested in helping me sell my finished knitted objects. So browsing the fair for knitted objects and not finding any was good intel. Forgetting about copywrite issues, I’m not sure it would actually be worth my time. I mean I don't think I could be fairly paid for my knitting, without it being prohibitively exorbitant. I guess if I lived in LA and sold one-of-a-kind-objects to the stars, it might be worth it. But I’d be in LA. I’ve read again and again by people who knit; no one understands the time and effort - unless they knit themselves. And if you do knit, you probably want to make the thing instead of buying it.

Crochet is different. I can make a toy in an afternoon or three, rather than three weeks. But I’m not sure if I actually want to design and make crochet objects to sell. The craft fair made me think about it, I just haven’t come up with an answer yet. I am more at home designing crochet than I am knitting… Then again, I thought that this would only take me a day or two, and it’s been a week: 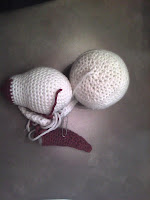 Full picture put together once I’ve sent him off to the nephew.

*(Disclaimer: I’ve only been to one fiber festival; there might have been knitting for sale there. I was in the market for fiber, not knitted items.)
Posted by seeherknit at 10:00 PM

I like the 'no good reason' is the perfect reason to wear it. I wish I (and everyone else) had that mentality. It's so awkward for me because everyone always asks 'why?' when I dress up. It's hard enough for me to figure out what to say when someone comments on what I'm wearing because I always feel ugly, but then when they ask me why I'm wearing what I'm wearing it makes me feel like I did something stupid or wrong. :(

Is selling your knitting something you actually want to do? I don't knit, but I definitely appreciate how long it takes and I KNOW how long it takes. I imagine it would be frustrating to spend a lot of time on something and not feel as though you got an appropriate return on it.

My go to answer for "Why are you wearing that?" is "Because I felt like it." I used to have a much more obviously dramatic flair; I wore a cape to my first high school dance. And that's the answer I gave then, and it's the answer I give now. It's short, people accept it and it keeps me from over explaining or from feeling weird about what I'm wearing.

I'm not sure if I want to sell my knitting. I'm still thinking about it.

How about designing and selling crochet patterns? I bet you'd come up with some really cute designs.

And that yarn you've spun is amazing. I want to learn how to spin someday. I hope your back issues resolve themselves soon!