This whole physical therapy thing is starting to get me down. My shoulder has been getting better but the therapist has noticed how upset my ulna nerve is. That’s the nerve in your elbow that hurts like the dickens when you hit your funny bone. I had been ignoring it, but it’s kind of hard to do so when a trained physical therapist has told you that something is very wrong.

So, I’ve been put on a knitting/crochet/spinning diet. For the next week I’m only supposed to do them a combined total of 45 minutes a day, 3 days a week, alternating days (whimper). I was put on this fast on Thursday. This past weekend we went to Houston (three to four hours of prime project drive time) and I did not knit or crochet on the way there or the way back. It was hard. I would not have made it if we hadn’t stopped in a bookstore Thursday so that I could have a new book to read there and back.

On the way back to Austin we went through Navasota* and I happened to look up and realize we were passing by WC Mercantile, the yarn/spinning store from whom I’d bought my wheel at the Seguin fiber fiesta. 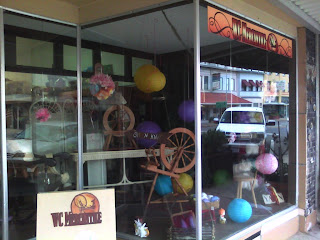 We stopped to check it out. Once inside I was stunned by how much of a spinning store it was. All the different types, and colors, and the sheer amount of fiber was overwhelming. 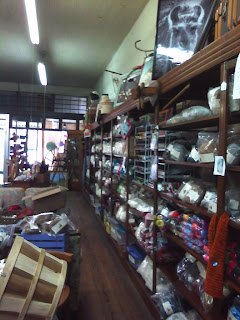 I had a hard time choosing. But I eventually picked out some lovely purple merino: 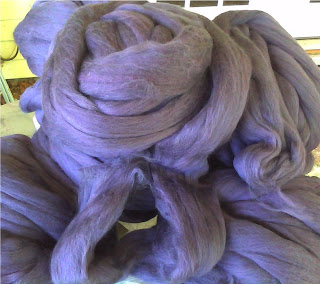 Why yes, that is enough fiber to spin into enough yarn to knit into a sweater.
And this should be enough to make a little shawl, or I might try to add embellishments to the sweater. 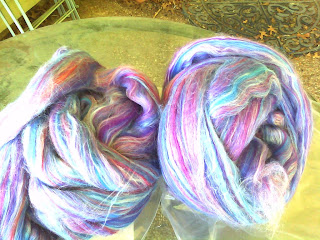 Merino/silk blend mmmmmm....
And then I got this silk because I couldn’t resist how soft it was. 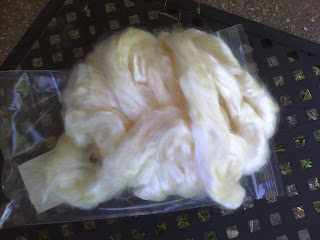 Cultivated silk fiber... so soft.
Spinning has taken its place in my heart right next to knitting and crochet; I didn’t even get a good look at the yarn side of the store. 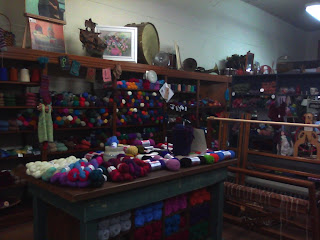 This is as close as I got.
I have something on both my needles and my hook right now, but nothing on my bobbin, and that might have had something to do with the fiber fascination. Also, I’m rather spoiled when it comes to LYS (Local Yarn Store); I have three of very high caliber that are near me. So I’ve access to yarn everyday. But while Gauge and HCW have a corner with some fiber in them, they have nothing like the selection that WC Merchants has. 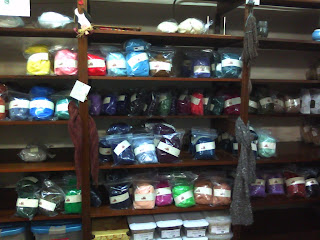 This is just the solid color merino section.
I was tempted by other fibers. There was some hand painted bamboo, alpaca mixed with silk, merino blended with everything, and angora and… too many to name! But as I am not actually supposed to be spinning all that much, just over 2 hours a week total (whimper), I thought I should probably limit the fiber to what I might finish in the next three to six months.

We got back to Austin, picked up the puppy who was staying with my parents (thanks mom!), watched Doctor Who with my sister, went home and crashed out. No laundry or yard work was done this weekend. Guess we’ll be doing that tonight.

That store looks amazing and I can't wait to see what you come up with for your "why yes, that is enough fiber to spin into enough yarn to knit into a sweater" purple merino.