This past weekend was an awesome blur of fun, food and friends. We went to our Friday gathering and watched the first episode of Macross Plus. It was much better than the few episodes I’d seen of the first series. We had to leave early because DH had to work early on Saturday. I'm looking forward to the next episode.
Saturday I watched movies and spun, went to yoga and came back and spun, and when DH got home we went to a birthday BBQ and had a blast.
Sunday got up and spun, then went to lunch with friends at Jim’s. DH and I then met up with other friends to see Pirates of the Caribbean 4 in 3D. It was good, not mind blowing. I think they had just a bit too much fun with the 3D. It broke the 4th wall enough to knock me out of the story a few times. Then we came home and I spun.
Monday we had the day off for Memorial Day. I got up and went to trainer at 9:30am and was dead for a couple of hours afterward. While I was dead, DH was making yummy veggies which we took to the obligatory Memorial Day BBQ in the afternoon. While there I got to play with 3-week old puppies, and a 1 month old baby. Cuteness overload!
So, I now have two new skeins of yarn, and my shoulder is bothering me. 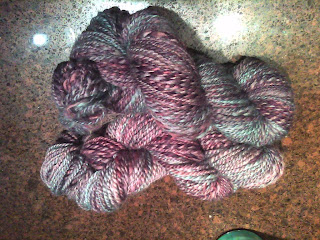 It’s the BFL I bought at Yarnorama. It’s soft, but not as luscious as the silky cashmerino. Nothing is. I tried to divide the fiber equally into two so as to spin and ply and preserve the color changes, but it didn’t work as well as I had hoped.
Since I’ve been to physical therapy, I’ve found out that really it’s my bicep that’s unhappy, not my shoulder. The bicep controls the turning of the wrist, rather than the bending of the elbow (there is a muscle under the bicep does that). That’s the motion you use when drafting, so I’m afraid I’m going to have to cut back on the spinning for a while. I’ve tried to spin with the fiber in my right hand and drafting with my left, but I can’t seem to get it down. I should probably practice with fiber I’m not as crazy about.
I’ve also found out that the issue I’ve had with my shoulder is probably linked to the issues I’ve been ignoring in my wrists. I had thought that I had the beginnings of carpal tunnel, and I knew I wasn’t going to stop knitting or crocheting, so I figured I’d just take it easy when my hands tingled and stretch them a lot. It turns out that my terrible posture has done something to the nerve that runs from my neck down my arm to my thumb and finger. And that if I can train myself to use my neck muscles it will help not only my shoulder but my hands too.
Posted by seeherknit at 9:00 PM

What is BFL? I feel like I should know this.

Also, as I read that last bit, I started to sit up straighter! I have the worst posture ever!

BFL is short for Bluefaced Leicester. It's a kind of sheep and BFL usually refers to the wool fiber that comes from it. The wool has long staple length and thin fibers, but it is not as soft as Merino.

I'm glad you are sitting up straighter. If I can keep this neck thing from happening to anyone else then at least I won't feel as bad about going through it.