The trip to Yarnorama in Paige was a lot of fun. I bought two bottles of spinning wheel oil and two braids of fiber. 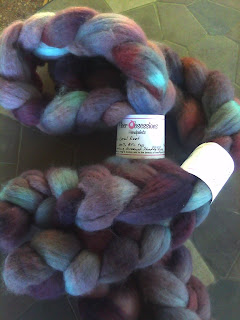 Isn't it pretty?
I got to pet the angora bunnies. They were deliciously soft. The island sea cotton fiber (I think that was what it was called) was just as soft. And unlike the bunnies didn’t make the odd growling noises. The cotton had a staple length* three times that of normal cotton. Susan, the very nice lady who was at the store showed us how she spun the short cotton fibers on a box charkha.

The box charkha is a spinning wheel, but closer to a great wheel than the treadle wheel I’m used to. Instead of a flyer or treadles, it has a sideways spindle** and a hand crank. Because one hand is busy turning the wheel you have to use the long draw method, rather than the two handed short forward draw that I prefer. Another major difference is that it is an accelerated wheel; it has three wheels instead of just two. Instead of having ratios of 1:15 (the bobbin spins 15 times for every one time the wheel spins) you have ratios of 1:65 to 1:100. That is an insane amount of twist. And that’s why it is used for cotton, with its very short staple length, because more twist is needed to keep the short fibers together.

The store was a wonderful trove of fiber and fun yarn. If I hadn’t been hanging out with non-yarny folks I’d have spent much longer than an hour roaming and pawing and marveling over color and texture.

We had dinner at the Roadhouse in Bastrop; my blue cheese burger was divine. It was the perfect end to an adventure not very far away.


*Staple length is generally used to mean the length of the each fiber in the roving.
**Sleeping beauty could have pricked her finger on this thing, it looked rather sharp.
Posted by seeherknit at 7:47 PM