If it is not important, let it go.

I enjoyed yoga this morning. As we were coming back from Savasana* we did a couple of deep breaths focusing on letting go of anything negative or “anything that does not serve you.” I am trying to internalize that idea and let things go that are truly unimportant.

Case in point, normally if I discover any mistake in my knitting I will either obsess about the mistake to where I see nothing else, or I rip it out and fix it. If it is a gift, and the mistake is not obvious then I can let it go. If it is for me, I have to fix it or every time I look at it all I see is the mistake. I am trying to let go of this need for perfection. If I’ve shown the mistake to other people and they can’t point at it two minutes later, I should let it go. I am practicing this on my stole. 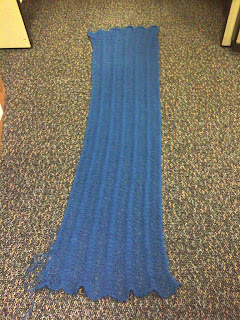 I finished a lace stole that I started 3 years ago. It’s the Quick and Easy Lacy Stole. (Yes, the irony amuses me, too.) It really is not that hard a pattern; I started it three months after I started knitting. It took me so long because I made it harder than it is, and there was no deadline since it was for me. If I had focused on it I would have been done within three months of when I started. If I started it now, it would probably take me a month, at most.

There is a mistake in it. You can’t tell unless I point it out. 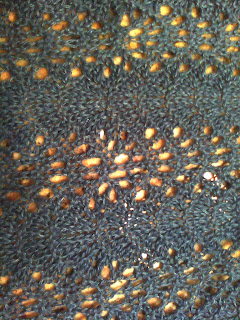 I couldn’t tell except I was counting pattern repeats to see how long it had taken per repeat. As soon as I found the mistake I picked up the stitches the row below it and prepared to rip back and fix it. The pattern is a 4 row repeat and the mistake was 25 repeats ago. Probably about 6 hours of solid knitting ago, which probably translates into six months, I skipped a row. If it had only been a few rows below I would have ripped it out without thinking, but I would have to rip out a significant chunk of shawl. So I debated the merits of ripping verses leaving it. I showed friends the mistake and they couldn’t see it. I showed DH the mistake and he couldn’t see it. So I finished the stole, and now I am trying to let go of the itch at the back of my neck. I figure it’s like a mosquito bite, if I don’t stare at the mistake, after awhile it will quit bothering me.

At the same time, I kind of like the way the mistaken repeat turned out. I can see using it as a pattern for a future shawl. I just wish it wasn’t in this one. So this is practice, letting go of this one mistake may help me let go of other things. Feelings hurt unintentionally by friends, feeling disorientated when I’m not in control, frustration with people in general, these things do not serve me, but they are very hard to let go of. I’ll practice on a shawl and work up from there.

* Savasana, or corpse pose is usually the last pose in a yoga practice. It is a meditative pose.
Posted by seeherknit at 7:46 PM

Heart this. And fwiw, I think you are better than most about working to let go of “anything that does not serve you.” It's one of the many things I admire about you, love.