I couldn't go to Scott's yoga class on Saturday at 1pm, so I got up early and went to the yoga class at Lelu Lemon. I'm really glad I went. It was a great class of Anusara yoga. I didn't know what Anusara was before the class, and I'm not sure I know exactly what it is now. But I want to learn more about it, because I think it might end up being one of my favorite types of yoga.

In class we focused on getting all the poses right rather than just flowing quickly from one to the next. We stopped in the middle of class for the instructor to demonstrate a more radiant Cobra. This is where you push the top of your arms back so that your shoulder blades are on your back and your heart is more open.

My favorite thing the instructor said was, "You don't create radiance, you already have it. You are discovering it."  I think she called the class Beatific Flow, and by the time we were done I was in a blissful state.  It helped keep me in a good mood when I didn't get to spin for nearly as long as I would have liked, especially since the fiber was fighting back.

One of the many reasons why I like both yoga and knitting is that there's always something new to learn. There's a 100 hour Anusura Yoga immersion that I am considering taking.  It's not inexpensive, but it might be something good for me. Or it might be a waste of time, and money. I'm torn. Do I want to learn enough yoga to teach? I don't know the answer to that, yet. I'll check and see if they are going to do the immersion next year, and if so I might be ready for the 100 hours then.

The rest of the weekend was spent hanging with friends, working on yard, and general upkeep.  I did squeeze in a little bit of spinning, and I finished my Serpentine Mitts: 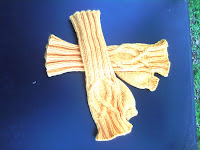 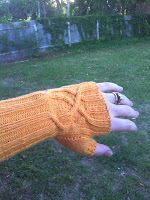 The color is much closer to the first picture than the second.
RuinosaAncilla gave me some fabulous wool fiber: 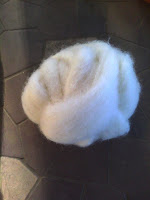 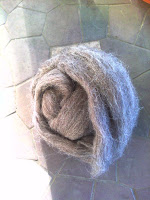 She is unfortunately sensitive to it, but her loss is my gain. I'll have to find some angora to send her.
I've already started to spin it on the drop spindle: 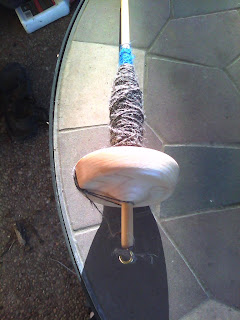 I hope it turns out well. I'm afraid it might be scratchy. I don't know how to make it smooth so I'll probably use it for hat yarn.
Posted by seeherknit at 6:31 PM