The adventure started when I thought, while in downtown Austin traffic at 5pm on a Friday, "I should go to Paige, TX."

For those of you who don’t know what a yarn crawl is, you are not alone. From my limited experience, it is when a bunch of yarn stores get together and sponsor a bus to take you to each store where you can then buy things. There is also a “passport” to get stamped at each store.
This crawl had drawings at each store to enter, gifts for every knitter at every store, and, if you made it to all of them, you got to be entered into a drawing for a grand prize. I couldn’t be on the bus that left on Saturday from Hill Country Weavers. But there was going to be a van on Sunday from Nan’s Needlework, and I could make that.

Back to the adventure: I had intended to stop by HCW on the way home for my passport, but I missed my turn and ended up heading towards I35 on 1st street. Debating the best way to turn around in traffic, I started daydreaming about wining the grand prize. I realized that if I hit up all the stores on the itinerary on Sunday that would only leave the three stores in Austin and the one in Paige. And then it dawned on me if I get to Yarnorama today, I could probably hit up the three in Austin on Monday, and I could win the fabulous grand prize. I doubt I’ll actually win, but you can’t win if you haven’t entered and at least I would be in the running. By the time I’d made it two more blocks I’d called Yarnorama, they were open till 7pm, called my parents to tell them I won’t be making it to dinner, and I was on my way to Paige.

Forty-five minutes later, I was still on my way to Paige. But I’d passed my house, and I would definitely be making it there before they closed. While paying attention to the speed limit bouncing from 50 to 70 to 45 mph, I contemplated how I was going to get to all three Austin stores on Monday. I had work Monday. HCW I could go to at lunch. Gauge on the way home. But Knitting Nest is no where near anywhere I need to be. Then it came to me, I’ll sneak it in on Saturday, after the football game, before we start celebrating our anniversary. I could do it.

I made it to Paige with plenty of time to spare. I’ve been to Yarnorama before but I’d neglected to take pictures. And I will have to go again since I only got a couple. I was in a hurry to get back to Austin. I wanted the detour to take as little time as possible away from hanging with my Dear Husband on our anniversary weekend.

The description as "a playground for the fiber obsessed" is not false advertising.

I should have taken a picture of all the fiber, but the spindles were just so pretty I got distracted.

And then outside there was this:

A Knitted Wonderland was pre-blog. I’ll have to post about it sometime.

The extra long staple cotton was gone, and the owner did not expect to be getting any more. But I did end up getting two ounces of longish staple cotton. 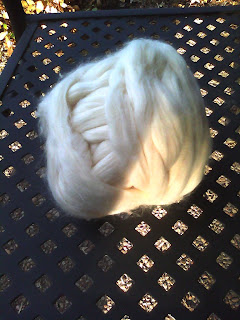 Next time, I will remember to get picture of the bunnies. They are adorable. And I will also get pictures of the walls of fiber.


Next post: The Knitting Nest, football, flat tires, and massages.
Posted by seeherknit at 6:02 PM

I wanna see the bunnies!