This past weekend a group of us got together and headed to the Texas Renaissance Festival. We arrived Saturday morning,  set up our tents, changed into garb, and headed in. I could go on about the mead (very tasty), and the food (so bad for you, fried and usually on-a-stick), how beautiful the weather was (until it got cold that night), but really I'm here to talk about drop spindling. And fiber, of course.

I walked around the fest with a bunch of fiber tucked into my skirt and a drop spindle in my hands. I took in the sights, talked with friends, and thoroughly enjoyed myself - all while making yarn. And fairly decent yarn at that. I had some brown Coopworth fiber that lent itself to the spindle nicely.

I haven't used my spindle much since I bought my wheel. But I think all the practice I've had spinning on the wheel has helped. I'm getting a much more consistent yarn. 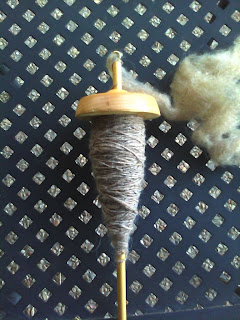 On the way to the festival I cast on for the Southern Lights Hat using my bright blue handspun. I finished that evening at the campsite. Well, when I say finished I mean it was wearable. The ends weren't woven in, it wasn't blocked, and it was missing it's pompoms. 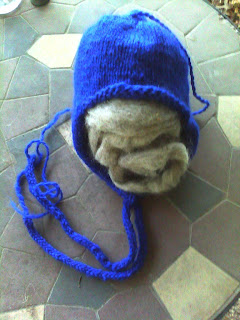 But it got rather chilly that night, so I was glad to have it. The hat is a bit small, so I'm going to block it bigger. If that doesn't work I'll rip back the decreases, knit another inch, and then do the decreases again. It's very quick knitting, so I don't mind, but let's see if we can block that sh*t out first.

When we were comparing notes that evening, I realized there was a stall with yarn and fiber that I'd missed. I had to go! So the next morning after breaking camp, we headed back in. And after a bit of searching, we finally found the lady with the wool. Her name is Sunni Florance, she was from Flat Rock Farm. 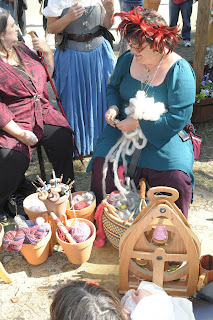 She also had goat milk soap, and spindles for sale. 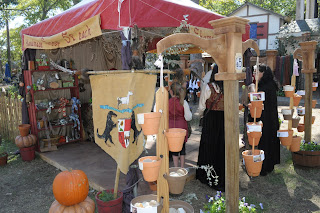 There was also handspun yarn. 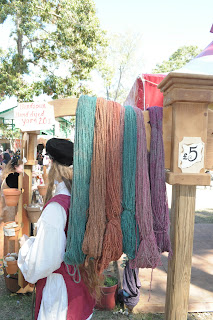 But, I only had eyes for the fiber. 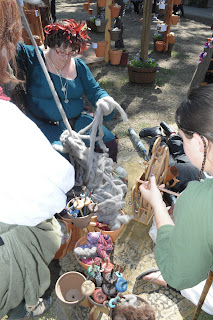 This is what followed me home.
Oh, and there was a goat. It was dressed up for Halloween. 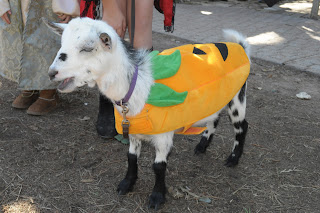 A friend of mine bought a spindle and Sunni gave her a quick demonstration. 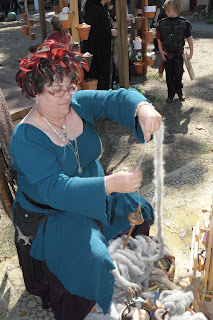 After that we played on the giant swings, caught the last bit of the Dead Bob show, and then it was time to head back to Austin.

On the way home we happened to go through Navasota, so of course we stopped by WC Mercantile. I may have gotten a bit more fiber.
I also picked up a new whorl. 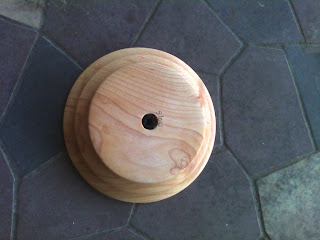 I'm hoping this larger whorl will help when I spin silk or bamboo. I hope larger whorl will spin slow enough to prevent me from making overspun yarn when using long staple length fibers. Although, considering the bounty of wool I've recently acquired, I might not have to worry about that for a bit.

Good friends, camping, dressing up, fiber, yarn, and meat on-a-stick - sometimes the world is perfect.
Posted by seeherknit at 6:00 PM

I visited a proper yarn store today (as opposed to Michaels/JoAnn Fabrics) and thought of you. Nobody else was in there and I wanted to ask about all the different yarn, but I had the kids with me and one of them was running crazy circles around the central yarn shelves. Better than pulling the yarn off the shelves, but barely. So we bought tiny bits of wool roving to try out wet felting and left.

I think it would be tricky to go yarn shopping with the kiddos. How do you explain that Mommy gets to pet the yarn, but they don't?
Oh, let me know how the wet felting goes. I've never tried that.